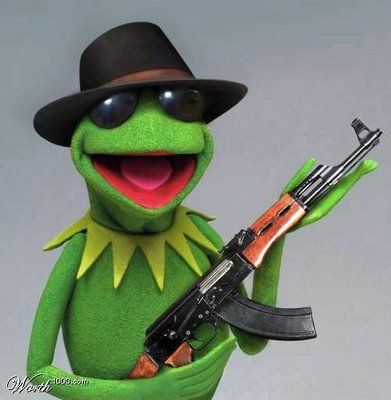 Be careful what you say, @JohnFB !! You don't wanna be messing with Kermit the freakin' Frog !! 🐸 🤣
Click to expand...

That photo reminds of how sadistic Kermit was in the 50’s for Wilkin’s Coffee! (This is sure not the ‘Rainbow Connection’ Kermit that we know now!)

Song4uman said:
I think this has probably been discussed before. I just couldn't find it. If so, please put this thread in the proper place.

I'd like to share my thoughts (and have others join in) as to what songs shoulda/woulda/coulda been a single from each album and maybe ones that shouldn't have.

Offering/Ticket To Ride
****I think the proper choice was made and I don't think I would have added any of the other songs as singles.

Close to You
****Close to You - yes. I think it was a great choice and was released at just the right time.
****We've Only Just Begun - yes. It was kept out of #1 by Jackson 5 and Partridge Family. Maybe if released a couple of weeks earlier or later might have hit #1?
****Baby It's You - I think this song would have done well. It was a ballad, but showed a little harder tone quality from Karen.

Song For You
****Hurting Each Other - yes. Kept out of number one by Nilsson. Maybe released a week or two earlier could have made a difference.
****It's Going to Take Some Time - yes...? I like it. Maybe would have done better if released as the third or fourth single?
****Goodbye to Love - yes. I love this song. I think probably peaked where it did due to the fuzz guitar...
****Top of the World - yes. Reaching #1, it was probably released when it should have been, but I do wish it had been released prior to Now and Then.
****I Won't Last a Day - yes. I think it might have charted higher if it had been released earlier. Maybe right after IGTTST.
****Bless the Beasts - I think this should have been officially released as a single. It reached #68 without being released as a single.
****A Song for You - If this could have been edited for length somehow, I think it would have made a great single. Maybe released right after GTL.

Now and Then
****Sing - maybe. It charted well and people liked it, but I think it made them look like a group that children should like. Just my thought
****Yesterday Once More - yes. It was kept out of #1 by Bad, Bad Leroy Brown. Maybe a week earlier or later release would have helped it reach #1?
****This Masquerade - I think this could have charted. They were still charting well and I think it showed a different side to them. Maybe critics would have felt it was a little "deeper" music.

Passage
****All You Get from Love is Love Song - Yes. This should have charted higher than it did. I think it's a great song.
****I Just Fall in Love Again - should have been released. Calling Occupants, but also a long song, but it was released. I think there could have been an edit or even record it again with some changes.
****Calling Occupants - maybe? It was released in September of 1977. The movie Close Encounters was released in November, but Star Wars came out in May. What if this had been released as a single the week Star Wars opened in theaters??
****Sweet, Sweet Smile - yes. I do like this song and wish it had charted higher. Maybe should have pushed it more to the country music stations and helped it chart higher there.
****B'wana She No Home - This is so different. Karen's voice had an edginess to it that we really don't hear on other songs. Jazzy. I think it might have charted well.

So, what if the above singles had been released, dates changed and charted higher....then maybe a Singles 1974-1978 might have been released in the US. and if so

****I Believe You - yes. The new single debuts on the Singles 74-78 album. Maybe it charts better and the album charts??


Made in America
****Touch Me When We're Dancing - yes. Maybe should have been released a week or two prior to the album release?
****Want you Back in My Life Again - maybe. If Karen's voice was brought forward and let the rhythm instruments and synthesizers be a little louder/harder, maybe would have caught more attention
****Those Good Old Dreams - not released
****Beechwood 4-5789 - Not released

Voice of the Heart
****Make Believe it's Your First Time - yes. But not as the first single.
****Prime Time Love - I think could have done well to possibly be the first single released, maybe a week or two prior to the album release.
****Two Lives - Another song that if Karen was more forward and bring out the percussion more, could have been a single. The intro is so soft.....different intro.....and have the song fade out, without the little piano coda.
****Your Baby Doesn't Love you Anymore - maybe. This is not a favorite of mine, but could have been released. Maybe if the three before had been released in the order and with some changes, this might have done better.

I think that is all for now.
Jonathan
Click to expand...

i agree and jambalya should have been released here as a single.. it was on the radio here. in ny... also love me for what i am i heard on the radio..alot. they could pull all their country songs and make a country album...
3

I love the version of "Make Believe It's Your First Time:" the one from "Voice of the Heart." It's a beautiful song expertly enacted. Simply marvelous. With the addition of that splendid bridge. I much prefer it over the version on Karen's solo album. This is a genuine ballad where as the other is presented more as a rock ballad. I do like the solo album though.

And I think I would have released "The Rainbow Connection." It's simple a marvel when Karen sings it. Such a delight. Just love the part where it changes keys "We have to believe that it's magic." It does sound like magic!
1

3Favorites said:
And I think I would have released "The Rainbow Connection." It's simple a marvel when Karen sings it. Such a delight. Just love the part where it changes keys "We have to believe that it's magic." It does sound like magic!
Click to expand...

Karen wouldn't have allowed it.

3Favorites said:
I love the version of "Make Believe It's Your First Time:" the one from "Voice of the Heart." It's a beautiful song expertly enacted. Simply marvelous. With the addition of that splendid bridge. I much prefer it over the version on Karen's solo album. This is a genuine ballad where as the other is presented more as a rock ballad. I do like the solo album though.

And I think I would have released "The Rainbow Connection." It's simple a marvel when Karen sings it. Such a delight. Just love the part where it changes keys "We have to believe that it's magic." It does sound like magic!
Click to expand...

Both versions of MBIYFT are excellent, each in their own way and each at the right moment - the added bridge in the fully orchestrated version is very well conceived and executed and serves as a very attractive and seamless transition - and unlike some I really like the addition of the full choral accompaniment...the Solo Album version is much more intimate and suits really well when one's mood demands or requires that approach - in fact, a whole album of similar minimal arrangements would have been an absolute delight, with just Karen, Richard on various keyboards and strategically selected solo instruments such as a flute, or violin, or best of all a cello (the one instrument most closely matching Karen's rich, warm tonality and her immensely compelling lower vocal range)...

I agree about "Rainbow" - work lead or not it's a wonderful vocal performance, apparently the only kind she knew how to deliver...but then this joins a list of about another dozen or so songs that should have (and could have) been released as singles and which would have scored big time on the AC charts, which was their proper home anyway...
You must log in or register to reply here.

Am I The Only One Listening?