My book just got here. I can't wait to read it. I'll do that tomorrow. Just holding it in my hands feels great.
C

Published on November 16, 2021 By uDiscover Team

Some 50 years ago, Richard and his sister Karen, better known as the Carpenters, were on top of the world – tirelessly touring, recording and promoting a blast of pop classics including “(They Long to Be) Close to You,” “We’ve Only Just Begun,” and “Superstar.”

Richard authorized one other Carpenters biography published in 1994. But the writer delivered what Richard has called, “the anorexia book” – and in it, for the most part, the story of the Carpenters’ music went untold.

Subsequently, Richard had other offers to tell the duo’s story, but he wasn’t intrigued until Cidoni and May came along in summer 2018, the two noting they’d had enough of media features, documentaries, and books focusing on Karen’s eating disorder (anorexia nervosa) and the complications which led to her death in 1983 at the age 32.

After the writers promised to put the spotlight back on the duo’s career, specifically their recordings, “I agreed to become involved in the project and involved I became,” Richard writes in the book’s introduction.

Carpenter submitted to approximately 100 hours of interviews and gave the authors access to his rarely visited archive of thousands of Carpenters artifacts, including family photos, outtakes from album-cover shoots, legends from master tapes, handwritten itineraries. Although immaculately organized, most of the items were untouched for decades and never published.

While the writers were committed to keeping the book’s narrative strictly business, they insisted Carpenter address the duo’s personal demons – notably, his addiction to sleeping medication and her eating disorder – when they affected the recordings.

Carpenter lived up to the agreement, and then some. In fact, after reviewing the writers’ first draft of the book, Richard was adamant about more personal details being included.

“I didn’t want this to be yet another one of those authorized biographies where this famous person never admits to making a single mistake,” Richard explains during a press junket for the book in September. “Nobody would even believe that. Nobody’s perfect. We weren’t perfect.”

Weighing in at almost four pounds, and containing 344 pages and approximately 300 images, at first glance Carpenters: The Musical Legacy looks like a mere coffee-table book of pretty photos. But it’s really a genre buster: part biography, part memoir, and part reference guide. The book also includes a painstakingly researched discography, along with essays by (and interviews with) key Carpenters colleagues.

“For those who are just discovering the Carpenters or those who have been with us from the start and want to know every little thing about our career, this is the definitive tome,” Richard says.

In the late spring, Carpenter had yet to put finishing touches on the book when he began preparations for his third solo album. And by June, he was recording Richard Carpenter’s Piano Songbook, a collection of piano-solo versions of Carpenters greatest hits and fan favorites. Already available in Japan, it’s set for release worldwide by Decca on January 14.

Richard’s summer also included a trip to the Henson Studios in Hollywood, to shoot promotional videos for Piano Songbook. It marked Carpenter’s first time in nearly 30 years performing on the site of the former A&M Records lot, where he and Karen recorded all of their hits.

Returning to the Carpenters’ former home away from home “was quite emotional,” Richard recalls.

A barrage of media interviews plugging the book and album began in late August and will continue through the year, but on October 27, Richard got a night off to attend a private gala at The Wallis Center for the Performing Arts in Beverly Hills, where he was named a “Steinway Artist,” celebrating his career-long association with the 160-year-old instrument maker Steinway & Sons.

Richard has performed on Steinway grand pianos on all but one of the Carpenters albums, as well as on the new Piano Songbook album. He also has two Steinways in his suburban Los Angeles home.

At age 75, Richard Carpenter seems nowhere near retirement. On the horizon for 2022, there’s a retooling of the two Carpenters Christmas albums into one musically and sonically improved disc. And he’s already talking about tracks for a second piano-solo set, should the first one be a success.

But he’s also enjoying the moment: appreciating a book that finally gets the Carpenters’ story right, replying to letters from the bright new flock of young fans joining the millions who have embraced the duo over the course of the last 50 years, and happy – if not surprised – that the recordings he made with Karen have become a permanent part of the global pop-music tapestry.

Did Richard expect all this – the book, the new album, the continued Carpenters love – to happen at age 75?

Carpenters: The Musical Legacy is out now.

Enter for a chance to win a copy of the Carpenters’ first officially authorized biography, signed by Richard Carpenter, Mike Cidoni Lennox, and Chris May.

Chris May said:
You bet! The TalkShopLive folks said they sent out an email letting everyone know that books were shipping today, but it’s very likely it got caught up in your junk mail folder.

Hopefully. I received no email. Not in my spam either. Thank you Chris for checking. I'm looking forward to the book.

My book came today, two days earlier than expected! I can't wait to read it and thankyou Chris and Mike for such a lovely book!

Staff member
Site Admin
I have to point out something that really struck home in the new book.


Recently I scanned into the computer a bunch of old family photos for preservation. And as I looked at one of the pages of THE MUSICAL LEGACY, I was struck by the resemblance to myself at about that same age. This is a picture of Richard at the piano from a newspaper article, and the one of me right next to it was just a family snapshot. I don't know if you'll all agree, but to me it's surely a case of twin sons of different parents. So much of Richard's early story mirrors my own, from playing records down in the basement, to accompanying a church on occasion, to backing up a sister with a decent voice. Obviously, our paths diverted thereafter as I left the piano lessons and never sought to join a group or make any money at it. 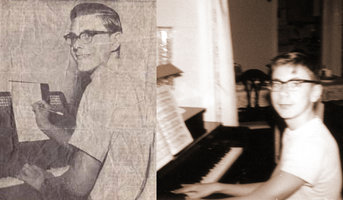 Just got the new book and I can’t wait to look at it all the way through. So very excited

thanks
@Chris May
@Mike Cidoni Lennox

I got an email that I saved $5.00 for pre ordering the book. I think there giving me some ho ho ho because I still haven’t received my book.

My copy is supposed to arrive by the weekend. I read the few reviews posted, so far, on Amazon.
I will post my own Amazon review once I have read the book.
Since the Princeton Architectural Press describes it as "The definitive biography..."
that will be my primary focus.

Chris May said:
You bet! The TalkShopLive folks said they sent out an email letting everyone know that books were shipping today, but it’s very likely it got caught up in your junk mail folder.

TalkShopLive email came this morning, the book is shipped!

I finished reading last night. Chris' discography is as interesting as the book itself! Be prepared to miss The Voice of the 20th Century even more after reading it.

I hope someone posts if they got one with Richard’s signature. I still think Richard should have signed 15-20 books for the A&M forum here, we are the small hardcore fan base that would have really appreciated it.

JUST managed to get the book.

This is compulsively readable. I'm on page 69 now and I have no choice but to stop. Great read so far!

Got mine yesterday. Beautiful book!

Due Tuesday by 9 pm. Seems so far away, but the days go by so fast.

Just got an email from Amazon - book arrives early - like tomorrow! My 2nd best birthday present!

Your going to love it !

I have to say I'm a bit disappointed that Richard complains about all the "multi-harmony overdubbing" and that "they've stolen our sound". That's simply not the case. The sound was Rod Temperton's. He'd been doing vocal arrangements just like that since the beginning of Heatwave in 1976. His vocal arranging style relies far more on Jazz than Richard's does. His is more a choral thing. The only time Carpenters really went Jazz in a vocal arrangement was on "B'wana" and that was a Gene Puerling arrangement. In short, Rod gave Karen his sound, not Richard's.
I'm on page 209 and still utterly into it. Very well-written all around.

When I ordered the book at Amazon back in May it was selling for $35 - when it shipped the other day it was listed for $29.99, which is what I was finally charged - that savings is 2 cups of Dunkin Donuts coffee while reading it...looking forward to doing so with eager anticipation.
J

My copy arrived this morning by Amazon. I'm in heaven just thumbing through it. We are not worthy Richard, Mike, and Chris! Thank you so much!

Announcing The Arrival - a Blessed Event for sure...
Thumbing through initially and came across the last heart warming line of Tom Nolan's "Reflections..." - so very true & no maybes about it...

That was funny....like the dark vomited up

My copy arrived this afternoon, I can't wait to start reading this book. It looks amazing and I know will give hours of pleasure to all Carpenters fans.
R

I received my book today in the mail...so happy it arrived a few days early.
It's quite heavy, I took a peak under the paper cover and the logo is embossed, nice touch!! Can't wait to read all the goodies inside and the pics
You must log in or register to reply here.