Brasil '66 gets the Millenium Collection treatment

With tracks like "Constant Rain (Chove Chuva)", "For Me" and "Berimbau", I'd say this set IS a "Best Buy", but you'd still want to pay the Lowest Price you can...

That, or I still think I would go to the Original LP's...

Staff member
Site Admin
As I suspected when I first put the disc in the car player, this new Millennium Collection disc for Sergio Mendes & Brasil '66 has been remastered with a lot of top end and bottom end EQ (treble and bass boost).

This morning I compared tracks from the new disc with their most-recently-remastered counterparts on the US Verve releases. The difference was instantly noticeable on "Mas Que Nada" with the thumpier bass on the new disc and the extreme highs on sibilant sounds and percussion.

Some may welcome this new sound - and perhaps it has its place - in a boombox or car stereo with limited EQ choices, this disc might sound pretty good. But on the home system, stick with the better remasters on the original albums from Verve.

As Mike mentioned, the best part about this release is the color picture on the rear. It's a great group shot of the second iteration of Brasil '66. If no-one else gets around to it, I'll hook up my ailing scanner and attempt to share it.

Staff member
Moderator
Thread Starter
I listened to the disk on a stereo here at work and I did think the highs were a lot brighter than they really should have been, but attributed it to the speakers. I suppose since Verve hadn't done "Pretty World" yet, the mastering person felt the need to make everything "match up," therefore tweaking all the tracks somewhat.
T

What does the picture on the back look like? Has it been used for something else before?

Mike Blakesley said:
I listened to the disk on a stereo here at work and I did think the highs were a lot brighter than they really should have been, but attributed it to the speakers. I suppose since Verve hadn't done "Pretty World" yet, the mastering person felt the need to make everything "match up," therefore tweaking all the tracks somewhat.
Click to expand...

It's also not uncommon to throw a "smiley face" EQ (boosted highs and lows) and brick-wall compression on "mass market" product. After all, you don't want your Brasil '66 CD to sound quieter than the others in the series, do you? *sigh* The recent album reissue CDs are so well done (by Bob Irwin), it's a shame that some in-house mastering engineer probably goosed it to give it that mass market appeal.

Your ears may not be deceiving you, in other words...

Staff member
Site Admin
I did a quickie scan here at work of the back cover: 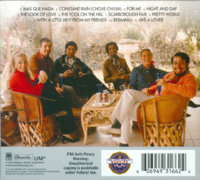 Though the disc may have the smiley-faced EQ, I don't believe it's brick-wall limited. The volume level on my CD player in the car was equivalent to most of the good CDs I have - up to a number 15 or 16 for comfortably loud listening on a highway. With today's loud discs, that number usually hovers around an 11 or 12, telling me that this disc isn't louder than others.

Also, when I did the a-b comparison this morning, the volume level on the Verve discs weren't noticeably different from this one - just the EQ.

That's from the same photo shoot as the Masquerade / Norwegian Wood Pic Sleeve. The pic with Karen and Lani both hugging the sides of a swing set, and the gents in the swing. I think I have seen this pic before in a booklet or something. It looks really familiar.

They all look so genuinely happy. Oh wait, I think those may be Coors cans on the table.

Staff member
Site Admin
Well the middle can on the table is a Coke can known as the "Harlequin design" first issued in 1966:

The other cans, you're right, look like Coors beer cans.

Hey, at least they didn't airbrush out the ciggies!

Harry: As always, you are the dictionary of knowledge. (with pics, too)

I wonder if the Coca Cola company knows about this?

With that coke can, you could almost mistake this picture for American Idol??? (sorry. I shouldn't have gone there.)

Staff member
Site Admin
Well, at the risk of throwing this thread totally off track:

Staff member
Site Admin
Um, does the text on this site:

remind anyone of the text on this site?

Staff member
Moderator
Thread Starter
I thought that sounded familiar...at first I thought they got it from the allmusic.com, but it's Rudy's text all right. Well at least they gave a link to the site, so that's a good payback I'd think.

Mike Blakesley said:
I thought that sounded familiar...at first I thought they got it from the allmusic.com, but it's Rudy's text all right. Well at least they gave a link to the site, so that's a good payback I'd think.
Click to expand...

As usual, it's the photos (even after having to download them) which make this set a "Must-Have"...!!!

Contributor
That's Sergio's old house on Encino Ave., right off of Ventura Blvd., that collapsed during the Northridge quake. When I drove by a few years ago, his dilapidated mailbox was still there, tilting precipitously. I'm sure the lot has been developed by now. My brother and sister in law live right next to Encino Ave. on the other side of Ventura--great neighborhood.

Staff member
Site Admin
I now see the Sergio Mendes & Brasil '66 collection listed on the http://www.ilovethatsong.com/green site, but when I go there, I'm not given the "download artwork" box like I get on other selections. Has anyone else gotten it to work for the Mendes title?

I signed up and have had no trouble getting artwork for the Carpenters and ABBA titles, but the Mendes won't work for me.

Staff member
Moderator
Thread Starter
Haven't signed up yet....I don't want to do it on the work computer here (we get enough spam in this thing as it is!) and have not been in my home office since the weekend...one of these days....

I won't buy these Millenium things- they are an insult to the artists and fans.

Staff member
Moderator
Thread Starter
Not to the casual listener who might be just looking for a sample. Who knows, they might lead to deeper catalog exploration, which is the whole point. (I do think they should cite the original album source on any compilation, so the interested fan could track down the whole album if they want to.)

The casual listener has dozens of better compilations to initiate them. This series is cookie-cutter disgraceful- to all the artists it encompasses.

Staff member
Site Admin
Was A&M's GREATEST HITS series "disgraceful"? Most of those only had 12 tracks.

As mentioned, the Millennium Series Mendes disc is quite close to what the GREATEST HITS entry was, both in track selection and number of tracks.

Harry said:
Was A&M's GREATEST HITS series "disgraceful"? Most of those only had 12 tracks.

They weren't great- but these are really bad. They treat all artists the same- a artistic disgrace.

Then there are at least THREE which I own and STILL own and consider ALL that I ever need by the following:

Andy Gibb -- Funny how a "Greatest Hits" with just one track added, "I Can't Help It", a duet with Olivia Newton-John, still gives me endless enjoyment... Actually heard "I Can't Help It" on the radio as I approached the record store and bought...

The casual listener has dozens of better compilations to initiate them.
Click to expand...

That is true, but the Millenium Collection has dedicated displays, a website, and other "tools" to get people listening. A standalone "Greatest Hits" album can get stuffed into an artist's slot at a store and, unless the artist is a superstar like an Elton John or an Eagles, the package won't get any out-front display.

Bottom line, this is a pointless argument, as ANY release that gets more Sergio into the hands of consumers is a good thing. (And you must admit that this collection is a better looking package than MANY of the third-rate import collections out there -- music aside.)
You must log in or register to reply here.