Brasil '66 gets the Millenium Collection treatment

That does make sense.

I think this material will be for new fans who are beginning to like Sergio after the marketing promotion his record company did with Black Eyed Peas and others. They are probably banking on the idea that they want to listen to his best songs in one CD, instead of having to buy a whole bunch of them. Sort of like, to get them started.

If I'm wrong, please don't get angry at me

aymnostalgico said:
I think this material will be for new fans who are beginning to like Sergio after the marketing promotion his record company did with Black Eyed Peas and others. They are probably banking on the idea that they want to listen to his best songs in one CD, instead of having to buy a whole bunch of them. Sort of like, to get them started.

If I'm wrong, please don't get angry at me

I agree--that entire series is geared to this type of music listener. Someone who's a casual listener, who wants the best-known songs in an easy-to-digest format. If it's priced low enough, it becomes an impulse buy. I'd never buy any of these myself, but I do recommend them for someone who's not sure if they like an artist or not: there's not much to lose to buy one of these, see if you like it, and then pursue it further if you really like the artist. Can't tell you how many other compilations I've purchased over the years that led to me buying a large portion of an artist's catalog.

To me they are really screwing up by not telling on the package what albums the songs can be found on. Since the whole Millenium Series is a marketing-driven project anyway, I'm amazed they missed out on that elementary thing.

It's clearly meant to be a "Starter-Set"... I saw a copy in a store and it seems to be in a "Digi-Pak" cardboard-type o' deal, at least packaging-wise...

Staff member
Site Admin
I still have not been able to access the alleged liner notes online from the http://www.ilovethatsong.com/green site. I've got a log-in, have used it, but no pop-ups occur on the Sergio Mendes page. It's not a pop-up blocker, because I get the download window on other artists.

Staff member
Site Admin
Months later - I still get no liner notes for the Brasil '66 title.

Staff member
Moderator
Thread Starter
Well. I hadn't signed up yet (forgot about it, actually) and now it looks like there's no point.

As I was comparing some tracks with other versions, I stumbled on a fact that both "Fool On The Hill" and "Scarborough Fair", two tracks that are always plagued with HAECO-CSG, appear here in a bit different form. The HAECO processing usually sounds diffused and unfocused, but here, there is a more natural sound, with vocals that seem centered. When I use the OOPS method to filter out the center channel vocals, the vocals do seem somewhat reduced, whereas they usually sound even louder when the OOPS is applied. I believe that whoever mastered this disc actually attempted to correct the HAECO-CSG processing, with some success. Those two tracks actually sound pretty good here, unlike on the originl FOOL album. That might be a reason for a fan to pick up one of these cheap discs.

Now, another thing. I was always a bit annoyed that no liner notes were ever provided online, and they were supposed to be online instead of destroying the environment with another piece of paper. Well, guess what - environmentally-friendly Canada somehow released this album in a jewel-case with a four-page booklet with some limited liner notes. I guess Canada has more trees to spare... I recently found one of these online, and present here the premiere of the online liner notes! 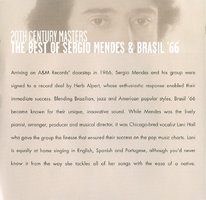 Staff member
Moderator
Thread Starter
In the booklet from Sergio's Celebration compilation, the section about the Stillness album contains a lot of the same words and thoughts that I wrote in my review of that album for the Corner. Rood, I think we should be getting royalties!

Staff member
Site Admin
At the very least, they should have sent you a promo copy of Millenium Collection.

So, a record company that's supposedly concerned about piracy, is fine with plagiarizing text from the Corner... ironic, isn't it?

Staff member
Site Admin
The chronology of this text-pilfering goes like this. 2000 or just before, Rudy and Mike B. wrote up some text for the main page of what was then the Brasil66.com site. Rudy gave up the domain when there seemed little interest in updating it.

The Millennium Collection for Sergio Mendes & Brasil '66 was released in 2007. There was supposedly a page online where liner notes and credits would be posted, but the only thing that occurred was that a page on Universal's site was created for the artist, Sergio Mendes & Brasil '66. A guess here is that they searched the Internet, found the old Brasil66.com site that was still active, assumed incorrectly that it was an official site and that therefore they owned whatever was there, and they copied the text verbatim and put it up on their Universal Brasil '66 page.

Heaven only knows what was going on in Canada. If you look for this compilation in Canada, it's listed as an eco-pack, just like the US, but here in my hot little hands, I have a jewel-case version where the compilers re-printed the website text, again verbatim, inside the four-page folded booklet. (I've uploaded all of the pictures to Discogs if you're curious whatever else is there.) Sérgio Mendes & Brasil '66 – The Best Of Sérgio Mendes & Brasil '66 (2007, CD)

Don't know why I bothered putting it back up a few years ago, but maybe another record company will pilfer some more of the text and make us even more famous.

Staff member
Site Admin
Didn't know it was there! I used the wayback to find the image above.

Staff member
Site Admin
The home page "Our Sites" dropdown tries to take one to brasil66.tk and not brasil66.ml
You must log in or register to reply here.